China’s hukou system was introduced in 1958 as a modern means of population registration. It was set up as a part of the economic and social reforms of the initial years of the communist regime. In 1985, the hukou system was manifested through the provision of personal identity cards.

In its current version, the hukou fulfills three main functions: the control of internal migration, the management of social protection and the preservation of social stability. The control of internal migration is the first objective of the system of hukou. Each citizen must be registered at birth, similar to a census. The register, which is the hukou itself, contains each individual’s basic demographic information including among others, the following:

Evolution of the Hukou System 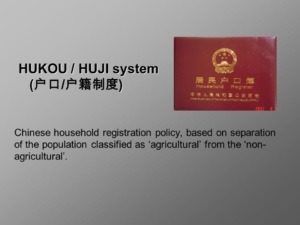 After 1958, the rural exodus was closely controlled by authorities. Since the 1980s, however, restrictions on mobility have been largely enforced. Currently, individuals who will stay more than three days in a location that is not their residence will need to acquire a temporary residence permit.

This system was implemented as a tool for geographic, economic, political and social control resulting in an apartheid structure that denies farmers the same advantages and rights as those experienced by residents of the urban areas.

Contextually, the People’s Republic of China in its early years was hugely agrarian. To hasten industrialization, the government emulated the Soviet model of prioritizing heavy industry. To be able to finance such an expansion, authorities overpriced industrial goods while in the process underpriced agricultural ones. Therefore, the two sectors experienced unequal exchange where peasants’ agricultural products were paid less than their market price.

For the government to sustain such an untypical imbalance, it created a system that will impose restrictions on the free flow of relevant resources, more particularly labor between agriculture and industry in the city and the countryside. This resulted in the classification of individuals into either urban or rural residents. The state required these two categories of the population to continue residing and working within their geographical locations.

While traveling was allowed, it was highly controlled and subjected to conditions. They will not be able to gain access to education, employment, food services, healthcare and other public services unless they obtain a government-issued urban-to-rural Hukou. To analogize, a rural farmer who decides to travel into the city without the necessary Hukou is like an illegal alien in America.

The Hukou System Prior to the Reform

The urban population has benefited from the hukou system throughout the history of early China. By the middle of the 20th century, however, particularly during the Great Famine, those with rural hukous were grouped into communal farms. Their agricultural produce was collected by the state as tax and in turn given to rural dwellers. As a result, they underwent massive starvation. Only when this crisis was felt in the urban areas did the government move to improve the situation.

While residents of the urban areas benefited from various socio-economic advantages, the marginalization of rural citizens remained even after the Great Famine. Farmers pay taxes three times bigger than urban dwellers but continue to access lower standard of life, education, and healthcare, if at all. China’s hukou system only served to restrict increased mobility, thus resulting in a caste system within the society.

In the 1970s, where there were capitalist reforms, about 260 million rural residents traveled to the cities illegally, with the intention of accessing the development in the economy enjoyed in the urban areas. Many suffered discrimination and even imprisonment. Increased unemployment and criminality are blamed on them. Yet, they continued to live in the urban areas, but in street corners, shantytowns and railway stations.

Benefits Brought About by Government-Issued Hukou

Early on, urban hukou made it possible to provide every urban household with access to housing, food, and other necessities based on their rights and finances. Despite a decrease of public subsidies during the economic liberalization in the 1980s, the urban hukou remained important in accessing employment, education from the best universities and the purchase of real estate in the urban areas.

Numerous social security benefits also come with a government-issued hukou including the following:

The abovementioned benefits constituted the “mandatory benefits” provided to all Chinese workers, subject to exceptions, ie only to those working within their locality where they are registered and not within the place of residence. However, with the rise of internal migration towards urban centers at the beginning of the economic opening in 1978, the urban hukou has become a bone of contention within Chinese politics.

By the 1990s, these benefits extended even to the relatives of hukou holders by virtue of the reforms implemented during the period. This included spouses of holders, but only those who are buyers of large real estate assets or those working with special qualifications. Also at the time, a number of migrant workers were given residence permits, giving entitlement to limited benefits.

By 2001, those residing in small towns and peri-urban areas, ie outside the built-up areas, can be issued hukou as long as they meet certain criteria, eg income. Another means for rural residents to acquire hukou is paying a certain amount of money. Those living in larger towns are imposed with stricter criteria in order to limit the soaring costs related to the increased speed of urbanization.

Currently, the hukou reforms remained decentralized, modest and progressive. This reform was prioritized by the State Council of China in 2010 up to 2012. The goal was to ease migrants’ access to a second rank hukou while leaving the existing rules within cities unchanged. Such a development is supposed to allow migrants having a fixed address and stable job in a small town to acquire an urban hukou. Under this reform, the local authorities are responsible for determining the minimum eligibility period of residence.

In medium-sized cities, migrants will be eligible to get an urban hukou if they obtain stable employment for three years and have participated in the social security scheme for a number of years. These new rules also limit the scope of rural land exchange programs against an urban hukou.

Issues with the Current Hukou System

The current hukou system continues to impose an economic-political differentiation between holders of an urban hukou and rural hukou. It is deemed to restrict numerous privileges for “real” city dwellers, eg quota of slots in universities, facility access to certain jobs, and unemployment benefits. This is in the exception of Guangdong, where there were ongoing reforms that aim to extend such benefits to migrants, including access to housing fund, public housing, and higher quality public service.

Elsewhere, an urban hukou is often a prerequisite for buying city housing. In rural areas, rural citizens have their own advantages, ie right to exploit the agricultural land, allocation of residential land, and flexible application of the Single Child Act for those whose first child is female.

However, China’s decentralized system has created imbalances in public spending between cities and the countryside. These disparities resulted in unequal access to goods and services, and variability in the quality of the latter. Therefore, there are inequalities in employment, with the citizens of certain regions being better equipped for the labor market.

This discrimination in favor of urban dwellers has contributed to rising inequalities in China, which have been growing steadily for two decades. However, there is potential for this to slow down in the future given the economic growth experienced in central and western China, eg increased wages of migrant workers and reduced differences in income between migrants and natives in cities. This reversal of the trend may continue to take place depending on the hukou reforms that will enable all citizens to seize existing opportunities.

Since the larger cities have reserved the delivery of new hukou to households with high income or high level of education, there is currently a large group of urban residents being restricted from getting social protection and health insurance. This means that while more than half of the Chinese population now lives in cities, only 35% of city dwellers have an urban hukou. Majority of inhabitants in the cities are therefore without full social protection in their city of residence.

Therefore, the hukou system has a powerful deterrent effect on migrant workers wishing to settle permanently in the city. The inability of migrants to access public social protection is currently one of the major obstacles to China’s transition to an economy of consumption the government aims to achieve.

Due to the hukou registration system, at least 250 million migrant workers have no access to social payments, whether for their children’s education or medical assistance. These urban disparities, coupled with sometimes archaic rural regulations, constitute a particularly important macroeconomic obstacle, particularly with regard to the twelfth five-year plan adopted by Beijing in 2010. It is the goal of the plan to rebalance China’s economy in order to increase domestic consumption and reduce inequality.

In the countryside, farmers do not usually own their land, which is lent to them by the authorities for periods of thirty years. In addition, user rights are not clearly defined and there is no formal market for farmland. Without urban hukou, migrant families, therefore, tend to return periodically to cultivate their land, to maintain usufruct, and ensure a minimum level of social protection, which is also detrimental to agricultural productivity.

The registration system has, therefore, become a major cause of inequality, an obstacle to economic transition and a source of many social problems.

Pierre Pradier is the co-founder of New Horizons Global Partners and Head of Corporate Strategy. He is French and has been living in China since 2005. He speaks Chinese, French, and English. Since coming to China, he has been involved with Business Expansion Consulting, helping companies to set up their operations in China and other Asian countries.